From Faint Inklings to Tangible Embodiments 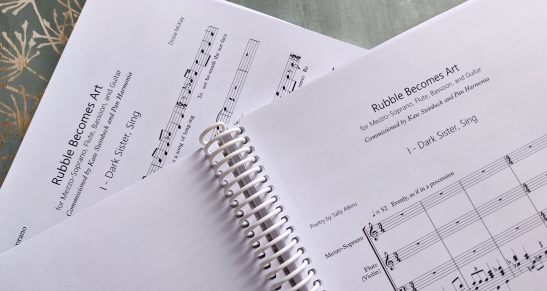 Once upon a time, Kate Steinbeck had a faint inkling about commissioning new music for her ensemble. We had talked about it many months in advance, before she really knew what she wanted. It always fascinates me that most ideas don’t fall on our laps from the sky in their final form, but rather make imperceptible impressions, the way our dreams do sometimes, when we barely remember them the next day. They are not as persistent as the need for food or shelter, and they are perfectly comfortable remaining in the background if we ignore them.

But Kate knew better. As a fellow artist, she knew she had to follow her instincts and let that vague idea lead her into the unknown. Now, in a few days, she will receive a triptych of art songs she will see for the first time and, along with Pan Harmonia musicians, will begin the process of discovering and interpreting music no one has heard before.

This creativity thing never gets old for me. There is nothing, then a simple idea sparks the existence of something out of nothing, and eventually, we get to see a new sculpture, a new building, a new symphony, or a new theater play.

I was brought up behind the Iron Curtain. We were taught to excel but also to blend in. It took me a long time before I understood that my ideas matter and are worthy of pursuing. I am so much better at paying attention to those whispering creative urges now, having seen first-hand that shy ideas often hold enormous potential and are eager to reward us if we give them a chance. Perhaps that’s why I often work on several projects simultaneously, subconsciously trying to make up for the lost time.

Six months ago, I began staring at three sheets of paper containing three poems. They didn’t emanate any music and didn’t come with any instructions. Gradually, the more I read them, the more I began to see shapes and structure, then colors and movement. I was swept by the excitement of sounds unknown to me and allowed them to show me how they wanted to be expressed.

I create because I am curious. I like to be surprised. I like to stumble upon new combinations of existing elements. I like to experiment. But most of all, I get to witness the process of vague hunches and inexplicable notions receiving their tangible embodiments.